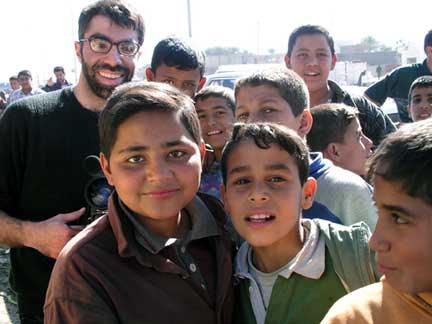 Usama Alshaibi, Director
Usama Alshaibi was born in Baghdad, Iraq in 1969 and spent his formative years living between the United States and the Middle East. His work in film and video has been screened at numerous film festivals and venues across the globe. He is the recipient of a generous 2005 grant from the Creative Capital Foundation for the Arts and a Playboy Foundation Award, as well as the winner of the Creative Promise Award at Tribeca All Access in New York City. In early 2004 Usama and his wife returned to his birthplace in Iraq to shoot his first feature documentary titled Nice Bombs, it was produced by Benzfilm Group and Kristie Alshaibi. Nice Bombs is being distributed by Seventh Art Releasing and several of Alshaibi's short films are included on International DVD compilations. He has completed one narrative feature titled Muhammad and Jane, and more than thirty short films and videos. He has also produced and directed music videos for a variety of recording artists, including Bobby Conn, Magic is Küntmaster and Panicsville. Usama was the founder and Director of the notorious Z Film Festival from 2000-2005. Alshaibi taught documentary film classes at Columbia College, and he has lectured as an artist in residence at schools and universities throughout the U.S. He was an on-air host and producer for Chicago Public Radio's Vocalo.org and is co-owner of Artvamp, a multi-media production company founded by his wife Kristie Alshaibi. In addition to reaching an eclectic audience with his film work, Alshaibi's photography has been included in several print and web publications, including Nerve.com. An interview with Usama appears in Studs Terkel's book Hope Dies Last. Feature articles have been written about his work in such places as the Chicago Tribune, Time Out, and Variety, and he has made appearances on various television and radio news programs. Usama is also a life long painter and illustrator working in watercolors and inks.

Hameed Alshaibi, My father and guide for our trip
Mr. Hameed Alshaibi received his Phd from the University of Iowa in Business administration in May 1979. He has taught at several Universites and Colleges in Saudi Arabia, Iraq, UAE, USA and he has also worked for the United Nations in Jordan. Hameed currently lives and teaches in Northern Iraq with his wife Intisar and two young sons.

Tareef Alshaibi, My cousin and our Iraqi guide:
Tareef has lived his whole life in Baghdad, Iraq. He has been in the Iraqi Army and has fought in the Iraq and Iran war, which lasted from 1980 to 1988. He holds a degree in Computer Programming. Tareef is married to Luma and he has two children: Wameed and Shams. His father and Usama’s uncle, Kamil Alshaibi, died in Baghdad in 2006. Tareef has survived numerous lethal close calls,
including being in the eye of a missile attack and an insurgency bomb. Although he has been unsuccessful, Tareef hopes to visit the United States someday. As of 2007 he has moved to Malasyia to complete his PhD.

Studs Terkel, Historian, Executive Producer
A prize-winning author and radio broadcast personality was born Louis Terkel in New York on May 16, 1912.   Terkel attended University of Chicago and received a law degree in 1934. He chose not to pursue a career in law. After a brief stint with the civil service in Washington D.C., he returned to Chicago and worked with the WPA Writers Project in the radio division. In 1952 Terkel began working for WFMT, first with the "Studs Terkel Almanac" and the "Studs Terkel Show," primarily to play music. The interviewing came along by accident. This later became the award-winning "The Studs Terkel Program." His first book, Giants of Jazz , was published in 1956. Ten years later his first book of oral history interviews, Division Street: America, came out. It was followed by a succession of oral history books on the 1930s Depression, World War Two, race relations, working, the American dream, and aging. His latest book, Will the Circle Be Unbroken: Reflections on Death, Rebirth, and Hunger for a Faith , was published in 2001. Terkel continues to interview people, work on his books, and make public appearances. He is Distinguished Scholar-in-Residence at the Chicago Historical Society.

Benzfilm Group, Producers
Ben Berkowitz
A graduate of The School of the Art Institute Chicago, Ben has been making films and music since he was a bright young lad of 13. Along with collaborator Joaquin de la Puente he performed and created all the original music in the first Benzfilm STRAIGHTMAN. And while he still avidly writes and plays music in his spare time, in the past 10 years he has become consumed with producing and directing films and other performance pieces at home in Los Angeles and abroad.

Ben Redgrave
Ben Redgrave is a graduate of the School of the Art Institute of Chicago. In 1998 he and partner Ben Berkowitz formed Benzfilm Group, co-writing and producing their first feature film STRAIGHTMAN. He co-wrote POLISH BAR with Berkowitz and is also slated to produce. Redgrave co-produced ROCKETS REDGLARE! and is currently working on the up-coming Iraq doc, NICE BOMBS. Besides playing one of the leads in STRAIGHTMAN, Redgrave’s most recent acting effort was playing an unlikely villain in Jennifer Phang’s HALF-LIFE, an apocalyptic suburban family epic.

Kristie Alshaibi of ARTVAMP LLC, Producer
Kristie participates in many illicit occupations in order to support her nasty filmmaking habit, including teaching video editing in Chicago, running various membership web sites, working as the former program director of the Z Film Festival and creator of the successful 72 Hour Feature Project. She has attempted to elevate her intimate fascination with bodily functions and primal urges to the level of art. In the process, she has received generous grants from such places as the Princess Grace Foundation, and the Film Society of Lincoln Center (New York), as well as a full scholarship from the School of the Art Institute of Chicago where she received her Master’s degree in Film and Video in 2001. Kristie is a Producer on Usama Alshaibi’s documentary film project, Nice Bombs, which has received funding from the Creative Capital Foundation, and was invited to participate in the Tribeca All Access Connects program in spring 2005 where it won the Creative Promise Award. Kristie’s work in film and video has been shown in dozens of festivals across the Americas, Europe, and Australia. She is the founding owner of Artvamp, LLC. Kristie’s alter ego, the fictional prostitute and porno actress Echo Transgression, appeared on MTV’s Sex2K, and is also the central character of Alshaibi’s first feature length digital film entitled Other People’s Mirrors. Recently, Mrs. Alshaibi took on the role of Producer for Bobby Conn’s new rock opera tilted, “King for a Day.” She has been a frequent contributor to $pread Magazine, and is finalizing her next feature length script.

Amy Cargill, Editor
Amy Cargill is a video artist living and working in Chicago, Illinois.  She studied Film & Video Studies at the University of Oklahoma before settling in Chicago to found Normal Pictures Inc, a media production company.  She is finishing the feature documentary LADIES AND GENTLEMEN, a film that examines the complex relationship between three transgendered women in a culture of shifting tolerance. Also committed to media reform, Amy is a videographer for Indymedia and has worked with Democracy Now!, Danny Schechter and Global Exchange.  She recently began production of GOD BLESS THE RED KRAYOLA AND ALL WHO SAIL WITH IT, a feature documentary film following the history of musical outlaws The Red Krayola , a band spanning forty years of dadaist psychedelia.